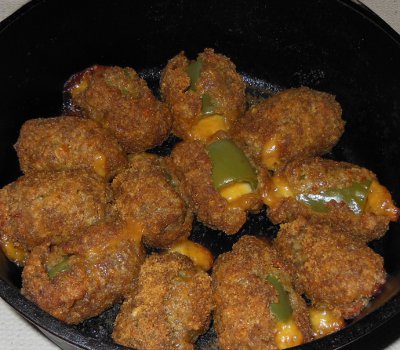 Cooking in Your Dutch Oven

Anything you can cook in your oven or crock pot, you can cook in a dutch oven. Whether you want a meal of chicken and rice, pot roast and potatoes, chili, or even pizza, a dutch oven does a great job! All you need to do is practice and have confidence.

Lots of the dutch oven cooking that goes on is done using charcoal briquettes. This makes it easier to estimate temperatures which results in better meals. All the cooking in dutch ovens that I've done has been camp cooking using real wood coals and I've been able to consistently turn out good food. My page about cooking temperatures discusses this more, but the important thing is to be able to estimate your oven temperature to prevent burning and ensure complete cooking.

Once you've cleaned and seasoned your dutch oven, you're ready to cook something grand. It's a good idea to start with something simple and something that will help build the seasoning layer on your oven. It's also a good idea to know how to regulate temperature, but that is why you want to practice a bit before cooking for others. I recommend you try these foods first, all of them should be about 350 degrees except the biscuits:

All of the foods listed above put a lot of grease onto the oven which helps build up the seasoning layer. When you are finished cooking, pour off the extra oil and let the oven cool enough to touch. Scrape off any chunks and bits with a plastic scraper and then wipe out all left-over oil. If you have time, make the next item on the list or do it the next day.

There are some foods that you should really wait to cook and be careful cooking. Tomato-based sauces, beans, and any acidic food is hard on the seasoning layer. Wait until you've got a strong, solid coating in place before cooking these and then be sure to clean up quickly as soon as you're done cooking. Beans left in a pot for a few hours will start peeling the seasoning layer off. Of course, cleaning up right away is always a good idea. 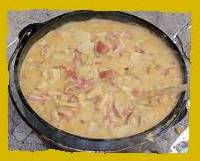 Stewing and simmering is a great, easy use of the dutch oven. In this way, you are using it like a crock pot - just throw everything in and let it bubble and steam for a couple hours. It's very easy and has a low risk of burning. Most of the heat can be directly under the oven so this is really dutch oven campfire cooking at its best. Just be careful not to get it too hot.

Dutch oven meat is awesome stuff, packed with flavor and rolling out clouds of aroma that makes neighboring campers drool. This is because the heavy lid of a dutch oven keeps the steam and flavor inside as long as you don't open it to peek too often. Even though the meat tastes great, some folks don't like the soft, steamed look of the meat. You can get around this problem fairly easily if you don't mind a bit more work.

Put some oil, bacon, or sausage grease in the oven and heat it to 350 degrees - all the coals can be under the oven. Once its hot, place your meat in and sear it. Flip and roll the meat so it gets browned all over to give it a color and texture that looks better to most folks. It also help seal in juices for even better tasting meat. When its browned, set it aside so you can pour out all the grease and wipe out the drippings - if you feel that will add to the flavoring, then go ahead and leave it in. Put the meat back in with whatever seasonings are called for, close it up, and cook as directed, usually at 350 degrees. If you're just cooking a hunk of meat, it should be about 30 minutes per pound for beef or pork and 25 minutes per pound of chicken and other poultry. 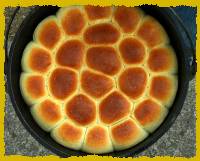 Cooking in a dutch oven definitely includes baking. Breads have a common tendency to burn on the bottom, but that is usually caused by folks putting too many coals under and not enough on top. When cooking breads, rolls, and biscuits, almost all the head should be coming from the top - place 3/4 of the coals on top of your oven. If you've tried bread or rolls and run into this problem, you should try a different way that will help prevent burning.

Place 4 or 5 small pebbles in the bottom of your oven. Mix up your bread recipe and put it in an aluminum pie tin. Balance this tin on the pebbles and then cook as normal. Having the pan raised on the pebbles allows air flow under and around the bread, creating more even heat all around and minimizing burning. It really works great! Use this to cook bread, rolls, pastry, or anything you want. I only use it for dough foods since it kinda seems like cheating to me. :-)

Desserts have a lot of sugar. Sugar tends to caramelize and make a sticky mess. Dutch oven desserts are the most popular things to cook. Do you see the problem? Many cooks get frustrated when they make a dessert and then have a crusty, sticky mess to deal with.
Another cheat to keep in mind for sugary desserts is to line the dutch oven with aluminum foil before cooking. This is a great help in keeping the sugar away from the pot and makes clean up easier. I use this for cinnamon rolls, cobblers, and dump cakes - some people always line their ovens, but that's up to you.

Don't forget that your dutch oven lid can make a great pan for cooking. Set it upside down on a bed of coals and let it warm up. Bacon, sausage, eggs, and pancakes all work great on the lid. Since it is slightly concave, it works great for making a single large pancake every time!
A good way to check the temperature is to drop a drip of water on. If it dances around, then that's a good heat. If it just sits there and steams, it's too cold. If it quickly fizzes away, it's too hot.
Cook Away - Camp Cooking Dutch Oven Temperatures
Tweet

Comments:
Mar 18, 2016 - Alease
Great info!  We have a local Dutch oven group and I really want to join, so appreciate the info!!!
Nov 11, 2016 - Kris
Do you have a recommendation on the kind/type/brand of charcoal to use?  Regular vs. Easy light?
When using wood coals, are you using approx. the same size as a briquette of charcoal?
Thanks!
Feb 05, 2017 - Steevun Lemon
In addition to your site. Is there a book you would recommend as the "bible" of Dutch oven cooking?
Feb 05, 2017 - Dutch Oven Dude
@Steevun - Absolutely! See this page for my completely unbiased opinion. :-)
Mar 05, 2017 - Julie m
Dutch oven cooking seems great but I have never even seen anyone do it.  My husband got me a 12 in. deep. It was top in recommendations
But some info i have seen says you can't bake in the deeps the heat is to far away.  But would the pebbles and aluminium pan idea work ?
Mar 13, 2017 - Old ManMay 11, 2021 - Mel
Can you cook foil packets in the dutch oven? Will it burn the bottom of the pot if there is any exposed areas (if the foil doesn't completely cover the bottom)?